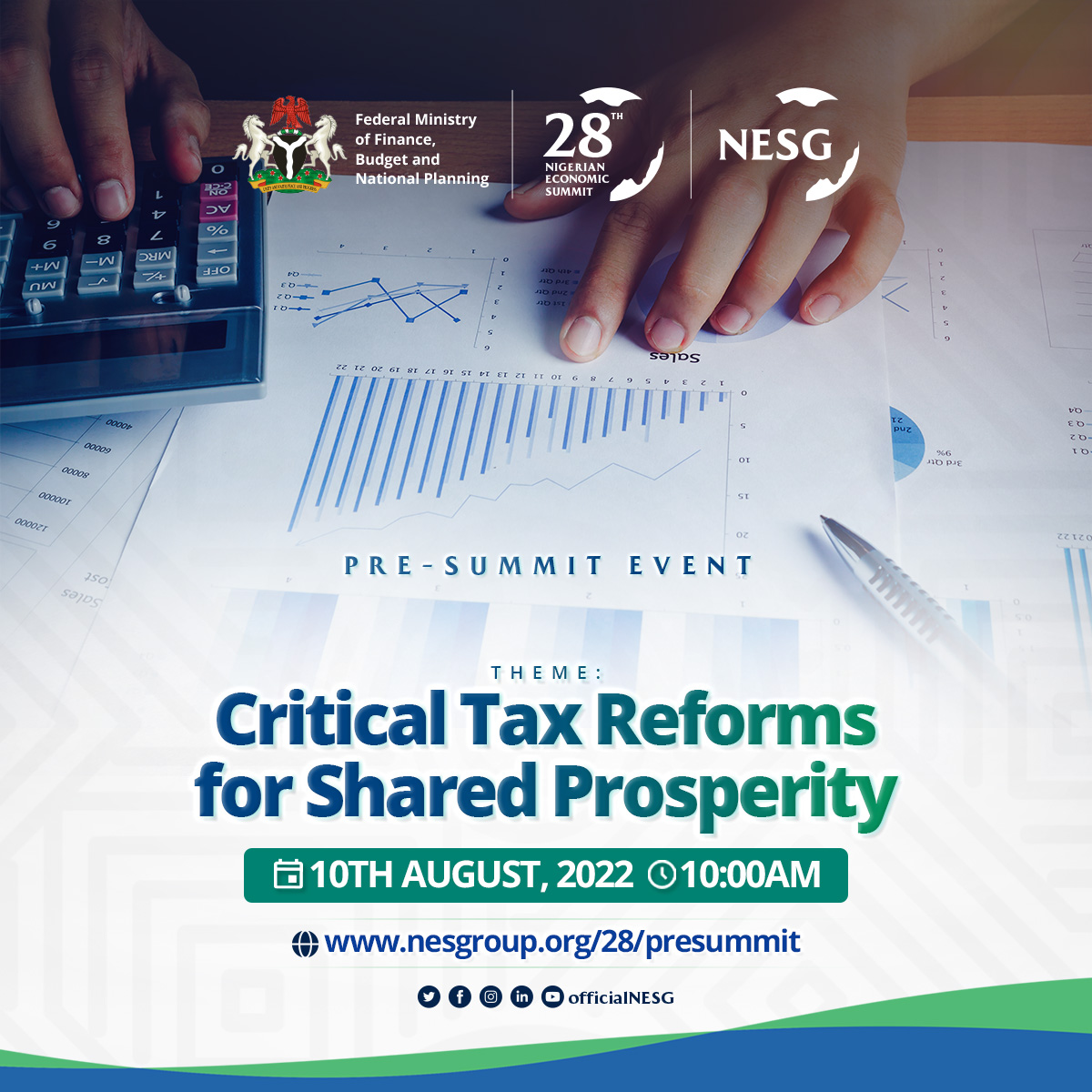 In his welcome remarks, #NESG Board member Mr Frank Aigbogun said that tax revenue is critical for government to finance its activities and financial development objectives for shared prosperity and promote the efficiency of government and the economy. Furthermore, Mr Aigbogun stated that the introduction of a yearly finance act has supported tax legislation and encouraged policy implementation, which can be strengthened by addressing issues related to tax compliance, taxation and support to households and enterprises. He noted that Nigeria suffers from low tax compliance and that the country’s tax to GDP ratio stands at 6 %, which is significantly lower than the average across African countries, which stands at 18 %.

Mr Aigbogun also reiterated the need for a paradigm shift in Nigeria’s tax processes. “Political leaders can lead by example by supporting a cultural change through tax compliance. Taxes should promote economic growth, especially for MSMEs that contribute a huge part of our GDP. Taxes can help finance public education and healthcare, offering better chances for people to improve their economic status. Taxes are the financial backbone of social security, protecting the poor. However, policy weaknesses, lack of reforms, and public understanding prevent taxes from playing a significant role in development,” Mr Aigbogun stated.

Furthermore, Mr Oyedele stated that the economy is affected by debt/taxes, politics and policies, geopolitical crises, insecurity and petroleum subsidies. “Nigeria’s fiscal landscape has been bolstered by the national tax policy 2019, resulting in annual changes through the finance act. Improved coordination at subnational levels, improved capacity for revenue mobilisation and the funding of the federal allocation committee from taxes. “Nigeria has a small tax base that continues to face structural problems. We need to focus on tax harmonisation that is broad-based and properly defined,” Mr Oyedele stated.

Mr Rajul Awasthi, senior public sector specialist, Domestic Resource Mobilisation, World Bank, said that Nigeria is a critical pivot for Africa’s progress, and it is essential to highlight that the Nigerian government is facing an existential crisis and that Nigeria’s accrued revenues will be significantly lower this year due to the debilitating impact of the fuel subsidy.

He stated that the Value Added Tax (VAT) compliance gap was immense, noting that in 2019, 3.1 trillion Naira was collected compared to 1.1 trillion Naira in 2021. “There is a need to rationalise tax expenditures, data sharing between Federal Inland Revenue Service (FIRS) collectors and State Inland Revenue Service (SIRS) collectors. Property tax reforms, excise reforms through policy measures and a reform of the PMS subsidy regime by moving towards full elimination by 2024 are essential in improving Nigeria’s tax revenue,” he stated.

During the panel session, the executive secretary of the Joint Tax Board, Ms Aisha Obomeghie, said that there is a need to streamline taxes and levies collected by federal and state governments. She also reiterated the need to build up a robust database that will aid the collection of the right amounts of taxes, noting that the solution does not lie in introducing new taxes and agencies but in finding ways to enhance tax collection, which will help fund Nigeria’s recurrent expenditure.

Furthermore, she revealed that tax revenue sharing between federal and states government is been worked on assiduously, noting that Nigeria’s tax system still faces the problem of capacity building and integration.

In his submission, the Director-General of MAN, Mr Segun Ajayi-Kadiri, represented by the Director of Research and Advocacy, Mr Oluwasegun Osidipe, said there was no doubt that the country needed money but that the government must exercise caution in introducing more taxes.

He tasked the government to expand the tax base, ensure the inclusion of more people in the informal sector and make the tax system progressive such that the rich would pay more than the poor.

On her part, Founder, Accounting Hub, Ms Chioma Ifeanyi Eze, said that Nigeria remains the largest economy in Africa and that SMEs form a considerable part of this, and that critical reforms will bring about prosperity in Nigeria must include MSMEs.